The Greek Orthodox Church of Our Saviour

The Greek Orhodox Church of Our Saviour is a parish under the spiritual and ecclesiastical shepherding of His Eminence Archbishop Elpidophoros of America of the Greek Orthodox Archdiocese of America under the jurisdiction of the Ecumenical Patriarch of Constantinople.

The Design of the Church of Our Saviour, Rye New York

(by architect John M. Kokkins from the Church of Our Saviour 1962 Yearbook)

In searching for the architectural expression the church of our community should have, it was generally felt and agreed that the church should follow the Byzantine traditions. It should also be adapted to the present time and place. Since the available site had unusual advantages, it was also hoped that the new structure should have distinctive appeal. It was generally felt among the members of The Parish Council, under the shepherding of His Eminence Archbishop Iakovos, that the dome as a basic characteristic of Byzantine architecture should be preserved. At this point, the architect’s work began.

The Byzantine tradition, of course, includes churches with basilican type plans like the church of St. Demetrios in Salonica; churches with plans in the shape of the Greek cross and multiple domes like that of St. Marks in Venice and the Daphnia’s Church near Athens; churches of concentric plan like that of St. Sophia in Constantinople and in modern times, churches with composite plans, i.e., a dome superimposed on a basilican plan like the cathedral church of modern Athens.

Of the various types of churches, the Greek-cross type has been the most common especially prior to the twentieth century. The Greek countryside is generally spotted with it. But, although Ste. Sophia has been an isolated example of its type, it is also the largest, most distinctive and most renowned. Instinctively, the Greeks think of Ste. Sophia as the ideal example of Byzantine architecture. But there is still another type of Byzantine religious structure at the Baptistry.

The baptistery developed out of the need of mass conversion of adults to the Christian faith by administering the sacrament of baptism only twice or three times a year. These structures were usually round or polygonal in plan with superimposed dome, the most likely prototype of which was the Roman Pantheon. The Architects of Saint Sophia no doubt were influenced by the Pantheon.

Best surviving examples of this type of church are: S. S. Sergius and Bacchus at Constantinople and S. Vitale at Ravenna, Italy. Like the Saint Sophia they were both built by Justinian and both with a dome a little more than fifty feet in diameter. This antecedent, which was hardly used by the Byzantines since the time of Justinian, offered in our opinion the most promising source of inspiration for the design of a modern church with Byzantine flavor.

We adopted the dome as the central theme of the design, a symbol of the heavens, over the entire nave. All other functions of the holy liturgy were subordinated to the dome: the main entrance or Narthex in front, the Altar directly opposite and aisles at the perimeter for general circulation and connection between Narthex and Altar. The function of the liturgy being simple, we felt the structure should so express it by being simple but impressive both externally and internally.

Externally, the curved roof of the dome, the use of the Mediterranean roof tile (so called in the USA Spanish tile), stone and red brick, circular and round headed windows are obvious links to tradition. Internally selected features of Byzantine ornament were deliberately used to give unmistaken evidence of the origins and the traditions of the Greek Church. The columns, the arches, the vaults, the dome, all combined to produce one simple and harmonious unit.

Here the focus is the altar and the iconostasis, visible equally well and almost equally distant from every part of the nave. Here the priest, the chief functionary of the liturgy, is literally in the center of things, in full and direct view of all communicants.

In entering the church and while still in the Narthex, one is immediately in full view of the dome and becomes fully conscious of its all-embracing importance. Wherever one stands, wherever one looks, the dome is ever present and always dominant. It is designed in reality in the shape of an egg, but it appears like an ellipse, the short diameter of which is 47′-0″, and the long 52′-0″. The cross-section of the dome is a three-centered arch, the peak of which is 47′-2″ above the floor of the nave. The dome is built of plaster and steel lath and ribs and it is suspended from heavy structural steel frame. Its large diameter is just less than half of that of Saint Sophia, but very large indeed by modern standards. It is hoped a large mural of the Pantocrator and his apostles will some day cover this vast space. What an opportunity for a talented artist and a generous benefactor!

The nave is lighted by twelve long and slender windows glazed with glass of various soft hues each window symbolizing one of the twelve apostles.

The chief characteristic of Byzantine architecture is the treatment of interior surfaces. Byzantine muralists and mosaic setters not only reached unsurpassed heights in their art but served as the source of inspiration for future painters, both Renaissance and Modern. One of the reasons of the preeminence of Byzantine decorative arts is the opportunity afforded for such arts by the unique wall surfaces resulting from the interior architectural treatment of Byzantine style. Such surfaces and such opportunities we have here too, in abundance, enough to excite the imagination of any artist. These surfaces have another side effect and unusual acoustics.

Approximately one-third of the nave (soleas) is reserved for the choir, pulpit, bishop’s throne, seats for distinguished personages, baptisms, weddings and funerals and is raised two steps above the main part of the nave. There are seating accommodations for 250 persons arranged in individual seats imported from Greece with carved Byzantine emblems. There is standing room for at least two hundred additional persons if necessary.

It is contemplated that the separation between altar and nave, and narthex and nave will be accomplished by means of especially designed and carved wood screens properly embellished with icons and other ornaments.

There remained one problem: to provide a proper and harmonious connection of the new structure to the existing mansion, which will continue to be used as community house. This was effected by locating the new church at some distance from the old house and connecting the two with a long cloister-like-corridor using the same stone as the house and gradually blending it into the brick and stone of the church. Thus the French-Norman of the mansion and the Byzantine of the church hold hands with the minimum of conflict.

When the site work is finally done and the new planting is in place the whole composition will be firmly brought together into one coherent unit. Mellow tones of immortal music or doleful peeling of chimes generated by the marvel of modern electronics will spill from loud speakers purposely housed in the cupola. Thus the architect hopes, new beauty will be brought out of the past to delight the eyes and ears of modern people.

Paper presented to the Aesthetics Foundation of the Arts, a professional and doctoral class at New York University on January 30th, 1996

Object: Greek Orthodox Church of Our Saviour in Rye, NY

Architectural criticism of a contemporary Byzantine Church by Antigone Vlachoyannis

This paper is presented in the 1996 Annual Taverna Journal in honor of our koumbaroi, Mr. & Mrs. Park Allen with best wishes for the future. We will miss you!

IN CELEBRATION OF A GREAT WORK FOR GENERATIONS TO COME

Situated at 2195 Westchester Avenue East of Westchester County, New York, the small magnificent Byzantine Church of Our Saviour with its church complex, is one of the most beautiful Greek Orthodox complexes in the country. Designed and executed gratis by dedicated architect John Kokkins and supervising engineer Peter Limber from 1961 to 1962, the church was built on the grounds of what used to be the Harmonay estate, on a piece of land encompassing more than ten acres of prime property.

The design of the church and community complex incorporated the existing Harmonay mansion. The building materials, stone and tiles of the two-leveled mansion, blend in the natural surrounding environment of threes and flowers and do not antagonize the Church’s building, which consists on the outside of similar materials such as roofing tiles, bricks, blunt marble and stone. An imposing entrance (because of its size, shape, severe simplicity of design and materials) was designed to distinctly invite in and to mitigate between the size of the actual entrance door and the height of the church’s building.

Agia Sophia in Constantinople (Istanbul, Turkey), and San Vitale church in Ravena, Italy, became the inspirational points for the architectural design of this complicated steel structure. Four different centers were designed to create the oval (not eclipse), egg-shaped dome, which rests on 12 round columns in alternating pink and ochre tromp–oeil-marble columns.  Two squared columns, one on each side of the main entrance, complete the circle formed by the columns, and have only a decorative purpose. The column’s capitals were made by Italian sculptors in New Jersey and are exact replicas of the ones in Agia Sophia.

The noted Byzantine artist, George Lydakis, designed and executed in repusse the naturally antiqued sterling silver iconostasi (division with icons, between the church and altar), encompassing a wealth of Orthodox symbolism. This iconostasi was inspired by the original one in the church of Agia Sophia. The mosaic floor (terrazzo) in pink, white, and brown colors, with green dark green and black trimmings, includes in its design at the main entrance, the two-headed Byzantine eagle, made of one-inch-thick bronze. The same eagle appears also on both sides (back and front) on the backs of the unique sitting arrangements of this church. Instead of benches, like in other churches in the U.S. or chairs like in Greece, we find at each side of the nave, 9 rows with approx. 12 large, black armchairs per row, each with a flat sitting cushion, in deep red color. All chairs were carved with the Byzantine motifs in Greece, by the traditional furniture carvers of the Island of Skyros and were shipped to Rye.

Four impressive, large round chandeliers in antiquated bronze, hang from the ceiling forming a hypothetical square. They were designed by Mr. Kokkins to compliment the architectural design of the building and reflect symbols from the realm of culture and faith. The Platytera (Madonna with Child) at the Proscenium Arch in the Altar, The Pantokrator (Christ) at the dome, as well as other frescos on the walls and icons of the iconostasi, are all executed according to Byzantine prototypes and underline the character of this temple of worship. Several more furniture pieces, such as the amvon (pulpit), the Episcopal Throne, the analogion (cantor’s stand), the pangari (candle stand), are all carved in the traditional, very intricate Byzantine pattern, by skilled Greek artists abroad. Although impressive with their carvings, they do not impose with their presence. Gathered together purposely in the same space of worship, few thousand miles away from their original prototypes of inspiration, they rather enrich our appreciation of craftsmanship, art tradition, history, faith, culture, communication and commitment.

Â The author would like to thank Rev. Fr. Baglaneas, Mr. Kokkins, Mr. & Mrs. Vance, Mr. Tahmincioglu and last but not least Mr. & Mrs. Allen for offering valuable information/leads during her research for this paper. 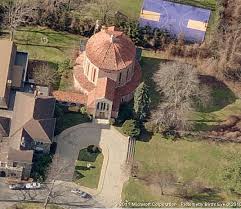